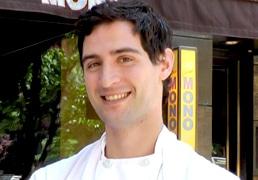 Chef Anthony Sasso grew up in Woodstock, New York, surrounded by art, music, creativity, and a love for food. After graduating college in New York City, he began traveling with his family to a small village in Catalunya, Spain to explore his Spanish roots. Gaining a love for Spanish cuisine, Sasso returned to New York City and enrolled in ICE, the Institute of Culinary Education. Once he completed ICE, Sasso brought his culinary skills to New York restaurants such as wd~50, Union Pacific, Bolo, and Casa Mono and its sister restaurant, Bar Jamón. Sasso returned to Spain’s Costa Brava, where he spent time working for El Hogar Gallego, and deepened his culinary knowledge and experience.

In 2008, Sasso returned to Casa Mono a better chef and an ambassador of classic Spanish cuisine. By 2009, Sasso was promoted to head chef at Casa Mono where he implemented butchery and in-house curing programs. He was awarded five consecutive stars from the Michelin Guide, Casa Mono’s first ever Michelin Star. At the time, he was one of the youngest chefs to receive this honor. Today, he continues to bring culinary excellence to Casa Mono in the heart of New York City, just east of Union Square. Casa Mono is a bustling, cozy, communal tapas bar with high energy and adventurous dishes.

Not only has Chef Anthony Sasso has been recognized by top chefs, but he has also been featured in top publications such as The New York Times, The New York Post, and Edible Manhattan. Today, he shares his top recipes and industry knowledge with Today’s World Kitchen, an online community for chefs.